|In Industry News
|By TWP Admin

For some CEOs, the outlook on the economy is nearing pre-crisis levels which could mean positive change for the end of 2020.

According to Melanie C. Nolen with Chief Executive:

“Chief Executive’s July polling of 326 U.S. CEOs finds confidence in business conditions a year from now continuing an upward climb from the Covid-created trough in May. At 6.6 out of 10 on our 1-10 scale, CEO confidence is now nearing the level it was in January (6.7), just before the crisis struck. 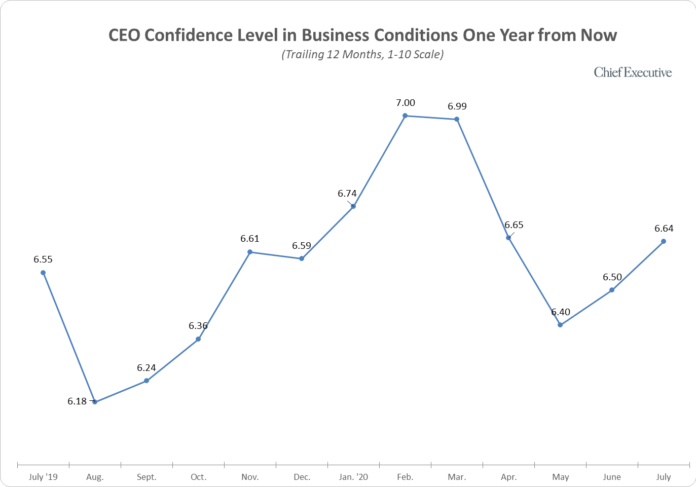 “Confidence in the current economic environment is also rising, adding 13 percent to last month’s gains, although it remains 26 percent below its January level, at 5.2 out of 10. 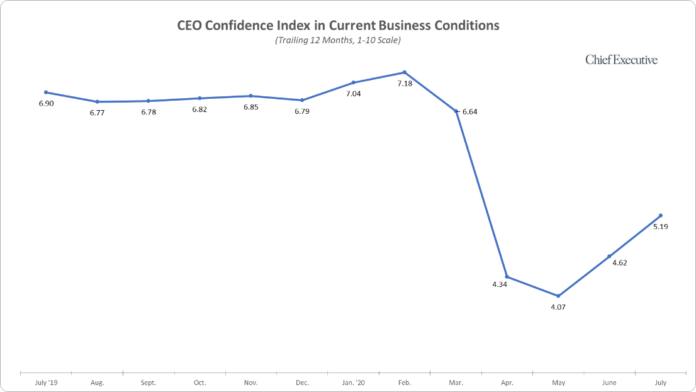 “CEOs who are optimistic about the future say they are betting on a Covid recovery, via vaccine or treatment. But many say positive news about the virus could be offset by the outcome of the federal election in November—although opinions on what outcome they’d prefer were fairly evenly split among those who expressed an opinion.

“’With any luck, the nation will have different leadership, the virus will be better controlled, and businesses will have incentives to modify their operations to adapt,’ said Peter Altschuler, president of Wordsworth & Company, explaining his forecast for an improved economic environment next year.

“’More people should be back to work a year from now, as I have optimism for a vaccine or at least some immunity to the Covid virus to allow business to get back to normal,’ said Jim Nelson, president of Parr Instrument Company.

“’Surprised to see that the U.S bankruptcy filings have not been so bad. The pessimistic forecasts were too dire,’ said Scott Heim, president of manufacturer Evo America. ‘American consumers are ready to get back out to the restaurants and spend dollars.’ For that reason, he anticipates future business conditions to be ‘very good,’ with an 8 out of 10.

“’I expected to have three months minimum of 50 percent down because of Covid,’ said Diana Mini, president of Shark Industries. ‘June was a huge month. I was only down one month at 50 percent, and we are only down about 3-4 percent for the whole year and business is very strong.’

“Jim Brewster, president of Venus Fashion, said that while he expects ‘great economic turmoil in the rest of 2020,’ he forecasts that ‘by 1st quarter 2021, we will be able to figure out how to ‘live’ with the virus (regardless of vaccine development).’ For that reason, he rates conditions a year from now as ‘good’ with a 6 out of 10.

“The rising optimism is translating to U.S. companies’ profit and sales forecasts. This month, 45 and 43 percent of our respondents say they’re projecting profits and revenues to increase over the coming year, respectively, compared to 37 and 40 percent last month. That represents an increase of 111 percent and 72 percent, respectively, since the bottom of the crisis in early April. 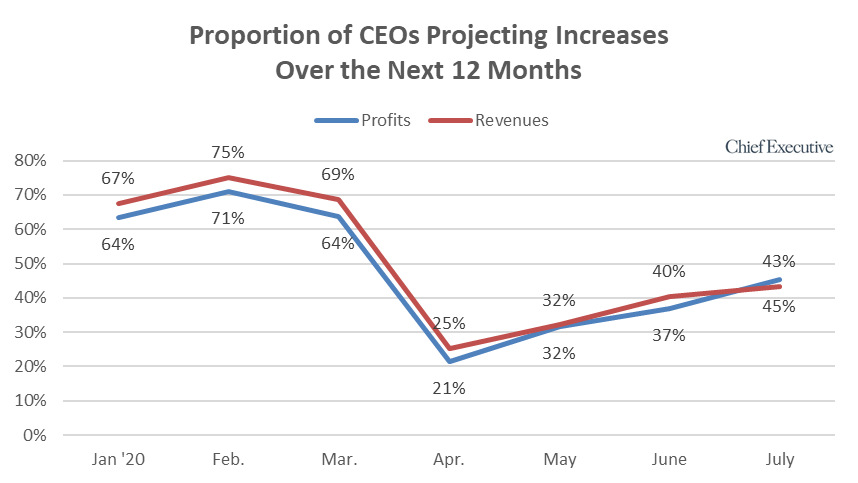 “We see a similar trend when looking at the proportion of CEOs who anticipate increases in capital expenditures, up 23 percent month-over-month and 91 percent since the trough in April. 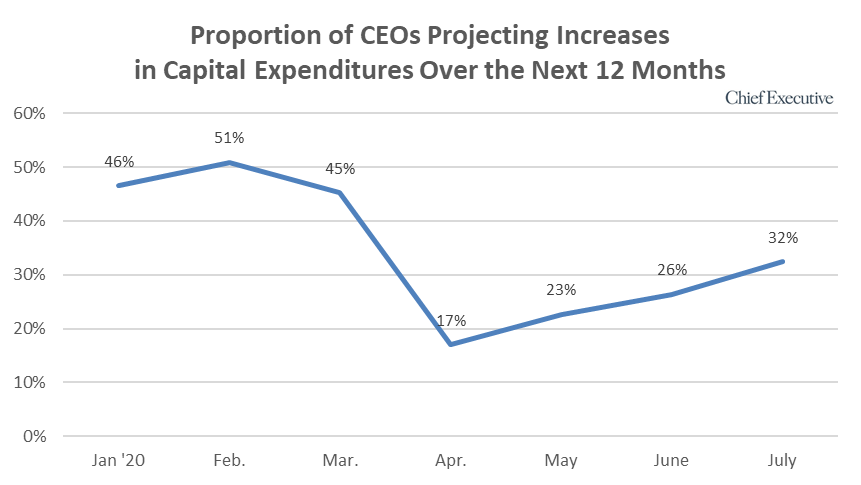 “The only measure that remains somewhat flat in July is the outlook for hiring. A quarter of CEOs said they’re planning to add to their workforce in the months ahead—unchanged from June—which is somewhat higher than when we polled CEOs in April, when only 18 percent of CEOs said they’d be hiring more staff. 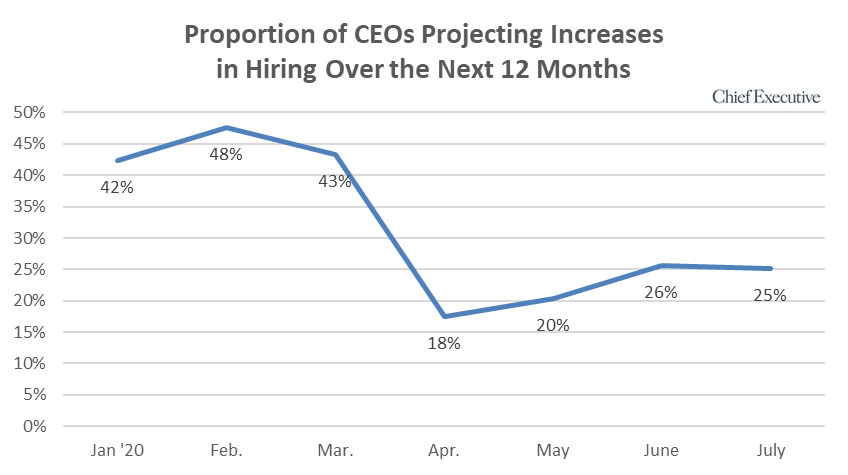 “Some CEOs say they are finding it difficult to hire the right talent in their regions, despite the high unemployment rate, while others say they are temporarily freezing their recruiting to match their sales expectations.

“’Even though unemployment remains very high, it is nearly impossible to hire adequate staff to run our operations in MI and MS,’ said John Gessert, president of American Plastic Toys, a mid-sized manufacturer in the Midwest.

“For months now, we have been monitoring the tapering of negative forecasts across all four indicators (revenue, profit, headcount and capex), with fewer and fewer CEOs reporting anticipating decreases over the coming year. The charts above highlight the continuation of this trend into Q3. 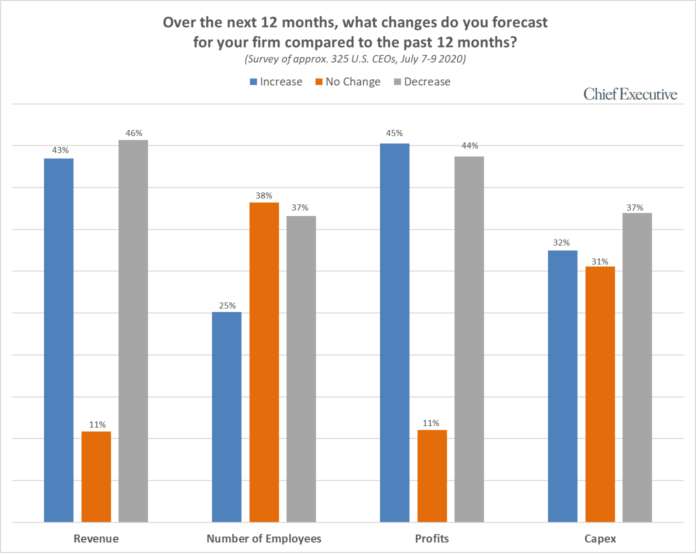 Sector View
“Looking at the data by industry, the outlook among CEOs in 8 of the 14 sectors covered by the survey are positive month over month, with the government/non-profit sector leading the way with a gain of 30 percent. This is quite a comeback for that sector, after losing 14 percent last month. While CEOs in that group say they remain concerned about the long-term impact of the crisis, they have optimism about a vaccine or treatment for the coronavirus. 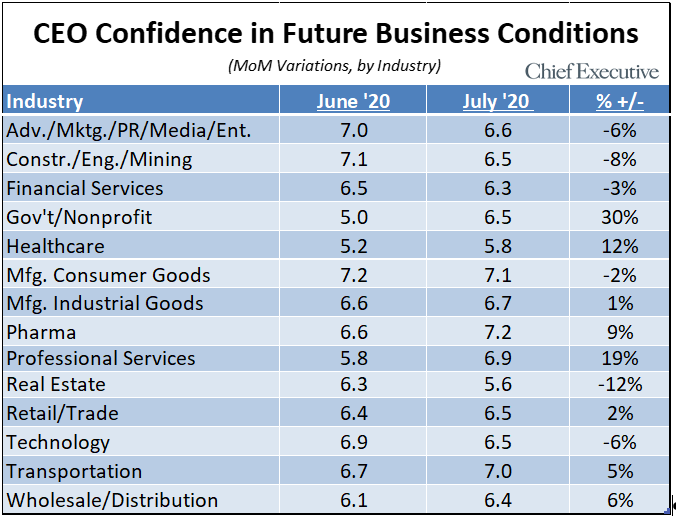 “Healthcare also had a substantial reversal this month, up 12 percent after losing 29 percent last month. Confidence in that sector has been highly volatile since the beginning of the pandemic, fluctuating between near 30-percent drops and near 20-percent climbs. Healthcare CEOs who participated in the survey say that while they are concerned about the crisis and its effect on healthcare programs, particularly Medicaid, the rate of recovery in patients who contract the virus is fueling optimism that the situation may not be as dire as initially communicated. 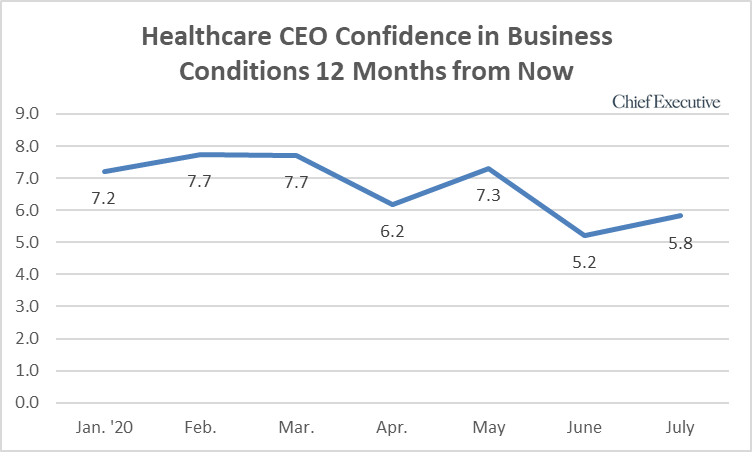 “Year over year, the data paints a similarly mixed story, with some industries up double digits and others down by the same margins—all highlighting the extreme volatility this crisis is having on business. 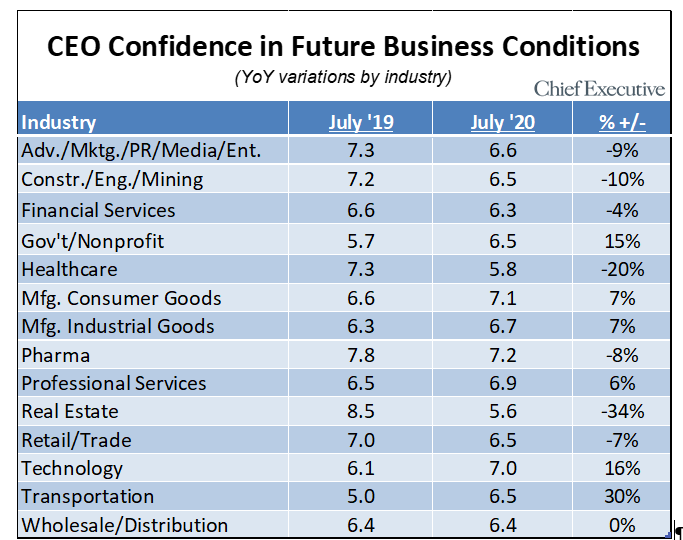 “When looking at CEO confidence by company size (annual revenues), small company CEOs had the largest increase, up 7 percent month over month. Many of the CEOs in that peer group say they are gradually getting operations back online with losses that were less than initially projected.

“As has been the case for the past few months, large companies remain the least optimistic in future business conditions. CEOs in that group point to the upcoming election as one of the main factors in that cautious stance, with concerns over tax increases and new regulations.

About the CEO Confidence Index

“The CEO Confidence Index is America’s largest monthly survey of chief executives. Each month, Chief Executive surveys CEOs across America, at organizations of all types and sizes, to compile our CEO Confidence Index data. The Index tracks confidence in current and future business environments, based on CEOs’ observations of various economic and business components.”